One Life – Film It, that’s the simple ethos behind Olfi, the latest action camera by HEDCAMz. We’ve tried their action cameras and love them, so we thought why not work together. Olfi cameras offer a great price and loads of features – 4k @ 24fps, 1080p @ 60fps, gyro stabilised sensor and an inbuilt rear screen for less than £150, we love Olfi action cameras.

Olfi are designed and manufactured by HEDCAMz, an action camera specialist based in Wales. We first met managing director Carl Long in the café at Llandegla/One Planet when he was in the process of redesigning his action cameras from the ground up. The one.five is the result of that redevelopment and we think it’s a bargain. 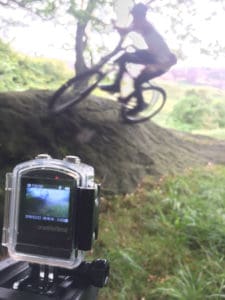 Here’s what Carl had to say: “We are really excited to be working with Dirt Factory. What these guys are doing is awesome and we really wanted to be a part of it so we we’re delighted to be given the opportunity of working with the team. Here’s hoping that the park will be open very soon and visitors can start creating some wicked Olfi content.”

Check out the Tech Radar review of the Olfi one.five we’ve been testing and raving about.

Dan Makin, Dirt Factory co-founder, said: ‘It’s great to be partnering alongside HEDCAMz and their super Olfi action cameras. Carl and his team are very passionate about providing a fun and high quality product, which aligns well with our brand at Dirt Factory. The Olfi camera is perfect for us to capture all our bike action whether that’s riding trails, hitting the pumptrack and airbag or filming one of our community projects.”

The DF team will now be running Olfi lifestyle cameras and we’re working on a number of innovative ways to incorporate the technology within Dirt Factory – watch this space.