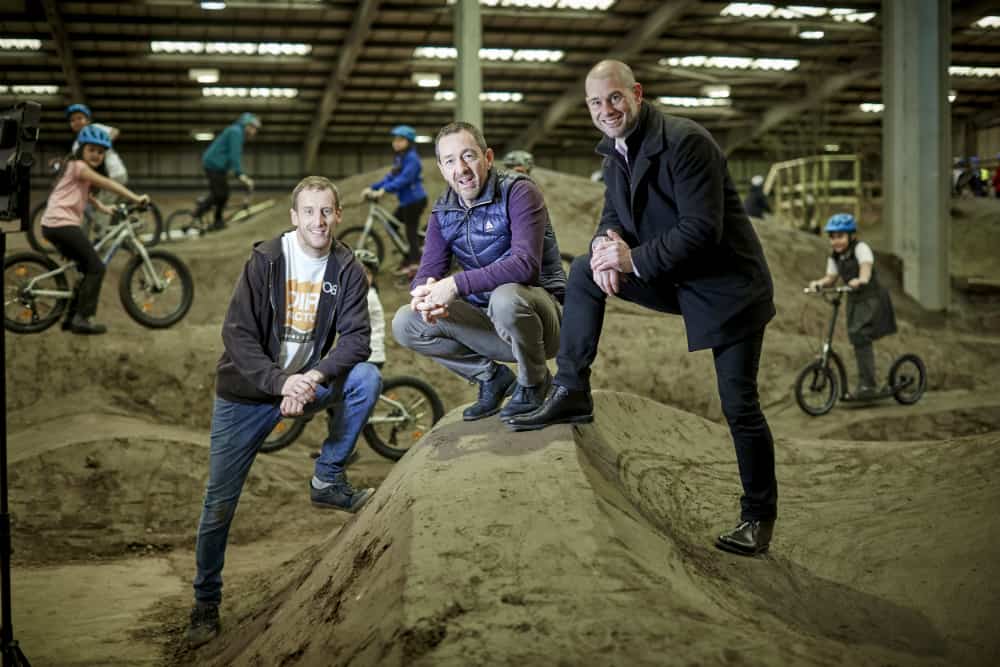 We recently hosted a great session for children from Medlock Primary School, Ardwick. They were the first school group to experience our new Dirt Factory Pop-Up bike park at Mayfield.

On Tuesday 5 March, twenty pupils from Medlock Primary School, aged between seven and eleven, were the first to hit the trails.

Joining us was Greater Manchester Walking and Cycling Commissioner and Olympic Gold medallist Chris Boardman. Chris watched on as the Dirt Factory team showed the kids how to master the trails, then put on a display of daredevil riding over the track. Mr Boardman said:

“It’s great to see the Dirt Factory welcome its first guests. It’s an amazing fun facility and I am sure it will help inspire kids to get off the sofa and on to a bike.”

The children from Medlock Primary School rode the Dirt Factory trails on brand new bikes supplied by Trek Bicycle Manchester Piccadilly. As well as riding the trails, pupils also used their creative skills to help to paint the upcycled pallet fencing within the facility.

“We’re a team of passionate cyclists who had a dream to create an indoor mountain bike track, so we are thrilled to see this come to life at Mayfield. It was amazing to work with the children´s confidence grow throughout their time with us.”

We have used more than 2,000 tonnes of reclaimed soil to create the bike park

The Dirt Factory Pop-Up will be open for up to two years at Mayfield, catering to cyclists of all ages and abilities. In the long term, the 24-acre Mayfield site will be transformed into a world-class urban quarter. Mayfield will create office and leisure space, the first city centre park in more than 100 years and 1,300 new homes.

“We were thrilled to support the launch of Dirt Factory. It’s a fantastic initiative and one that fits perfectly with our own values in terms of community and well-being.

“The Dirt Factory team has worked tirelessly to create this great attraction which I’m sure people will love.”

In 2016, U+I were appointed as development partner to deliver a wholesale regeneration of Mayfield station and surrounding areas. Through a wide range of events, including everything from private functions to weddings and trailblazer events. Including the Manchester international Festival programme for 2018.